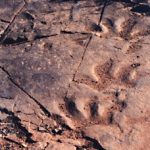 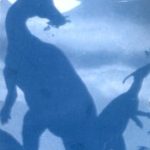 The rocks exposed on the Gansfontein Palaeosurface were originally deposited some 250 million years ago during the Permian Age on a vast flat alluvial plain surrounding an inland sea that then covered some two thirds of the present South Africa land surface.

Several large meandering rivers flowed northwards out of the mountains of the Cape Fold Belt depositing layer upon layer of sand, silt and mud. Over millions of years these sediments have been compacted to solid rock, sand into sandstone. Silt and mud into mud rock. And then Antarctica broke away and the depositing stopped and the erosion began. Layer upon layer of sand and silt were washed away during millions of years until at the end the dam wall immediately above the palaeosurface broke and the palaeosurface was uncovered.

It is one of the most spectacular palaeo surfaces in the Karoo. Spectacular in the sense that you’ve got here from little “squiggly” worm trails, an aquatic arthropod and the fish marks to the traces of Dinosifalians and even one print of a Bradysaurus.

On the farm Riethuisies there is a distinct trace fossil of a gastropod and the same trace fossil was found recently in Antartica. This is of great importance for Palaeontologists. It confirms their so-called theory of continental drift. Our most common skeleton fossil is that of the Diictodon, a mammal like reptile living in barrows and that is probably why it is so commonly found because they drowned easily and was already covered up by earth where they stayed to be fossilized over millions of years molecule by molecule. Skeleton fossils of these animals were found south of Fraserburg mostly on the farms Riethuisies, Hoedemaker and De Postjes. More info at PaleaoSurface. 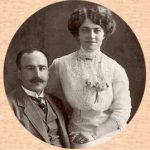 The legendary writer/poet A.G. Visser lived in the Fraserburg district. He was born in a tent under a pear tree, on the farm Zaaifontein. 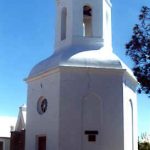 This hexagonal structure, unique in South Africa, has become the symbol of Fraserburg.

The pepperpot is situated on the Market Square in the middle of town. It is approximately 28 feet (9 metres) in height, of stone construction and stands on broad foundations.

In earlier years there was a bell in the tower and the crossbar on which the bell hung can still be seen.

The Pepperpot was designed by Rev CA Bamberger, the first minister in the village. It was built in 1861 by Adam Jacobs.

The building served as the Magistrate’s private office, the Market Master’s office and also the first library. The Town Clerk administrated the town from here and it also served as council chamber when the village attained Municipal status in 1862.

When the municipality moved to other premises, the Pepperpot was used as Public Library, School Board Office and storeroom respectively. At one time the assistant Rev Van Schalkwyk used it as a study.

It is clear that in designing the Pepperpot, Rev Bamberger was influenced by architecture seen on the continent as he received his theological training in Germany. The resemblance is that of a pavilion of the Berogne period of that century with bowed lines.

The Pepperpot was proclaimed a National Monument on 29 October 1971. The proclamation appeared in the Government Gazette of 1959.
May the Pepperpot’s bell continue to toll far into the future, its resonant tones reminding everyone of the beating of Fraserburg’s warm heart! 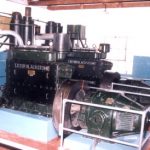 2 Voortrekker Street. The town obtained its first direct current on 16 September 1938. During September 1956 this was converted to alternating current, and on 24 June 1983 Fraserburg received its first Eskom power. Seven Lister Blackstone engines may still be seen. 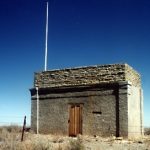 Powder magazine, erected by John Findlay in 1870, to store ammunition in case war should break out with the Korannas, under leadership of Kupido Pofadder and Klaas Springbok. The roof is dome-shaped, to limit danger from fire. It was also used by the British troops during the Anglo-Boer War. 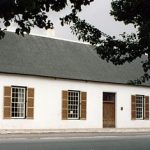 The Old Vicarage Museum was erected in 1856 to accommodate the first reverent of the newly founded congregation, Rev Carl Arnoldus Bamberger. With roof made from reeds, white washed walls, windows with small panes, elaborate front entrance and discharge pipes, all this give the building a typical Cape Dutch appearance. It was the only formal building in the village. The four inside walls are rounded (probably a sign of Reverent Bambergers involvement in the original building plans). He loved the Dutch style with their typical rounded structures.

In 1895 a study was added. It was requested that the study should have an outside door only with direct access to the vicarage. Rumour has it that the vicars wife was a real shrew. The dear old Vicar practiced what he preached “Stay away from all evil”, thus an intact wall between him and evil. Much later an inside door was added.

At present the building exhibits a museum display.